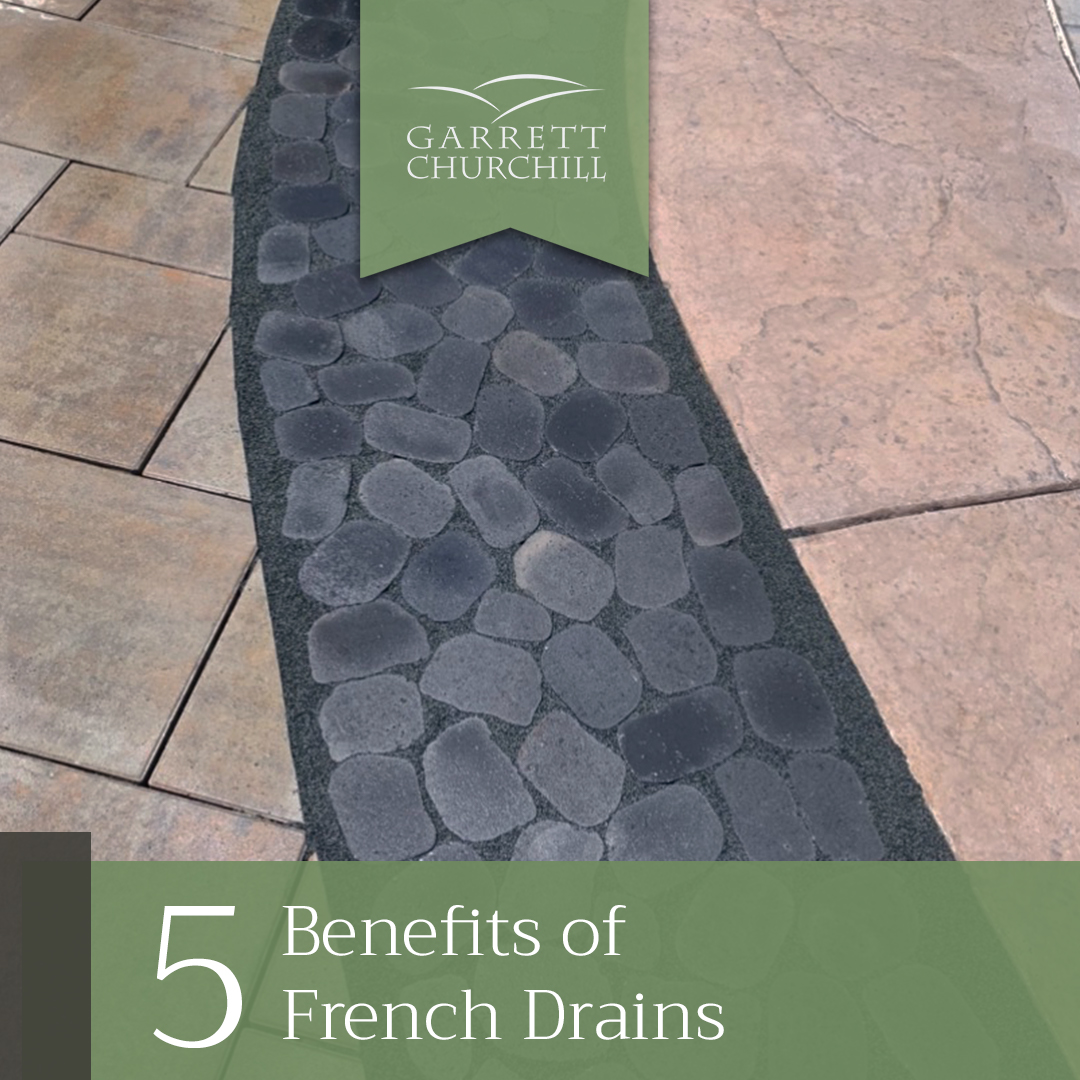 Proper drainage—which is essentially waterproofing—is a critical element of landscape design. Without an effective drainage system, all the work and planning that goes into creating the perfect home and landscape could all be for naught. A lack of operational draining puts property at risk of severe water damage including flooding, a weakened building foundation, and damage to trees, lawns, and gardens.

A French drain is a commonly implemented drainage system which provides several benefits to home and property owners. Read on to learn more about French drains and their many benefits.

What are French Drains?

Contrary to popular belief, French drains did not originate in France. They were instead invented in the 1800s by an American farmer named Henry Flagg French, originally designed to be used in agricultural settings.

Also known as trench drains, filter drains, sub-drains, and French ditches, French drains are primarily built underground. They collect water below the surface through a perforated pipe and use gravity to transport it from one location to another—typically away from the home’s foundation.

There are several perks to implementing French drainage systems. Five benefits of French drains include:

By redirecting water to a designated draining area, French drains prevent water from pooling in one area or seeping under the foundation of the home; excess moisture can lead to mold or rotting wood.

This, in turn, prevents the foundation of the building from bowing, cracking, and weakening altogether due to the added pressure from expanding soil.

For significant home and yard renovation projects, we recommend recruiting the help of family, friends, or landscaping professionals.

Improper drainage can lead to a lawn that is too moist and muddy, and therefore not a functional space. A French drain can help to keep your lawn clean and dry, making it a perfect spot for a garden, outdoor seating, or a play area for children or pets.


French drains are relatively inexpensive, especially if they can be installed in a way that does not require any change to an existing structure (such as a patio.) As long as you are able to build a trench around and underneath other areas of the property, the installation process shouldn’t break the bank.


Because they are built underground, French drains can easily be covered with aesthetically pleasing elements such as pebbles, walkways, soil, and plants. Some homeowners also opt for discreetly designed grates to preserve the original landscape design.

Our landscape team recently underwent a French drain installation project which required a creative solution. A client had an existing patio and installed a pool which needed an effective yet aesthetically pleasing draining system.

Instead of installing a channel drain, which would have required extra work on the patio, we chose to install a French drain underneath the pavers. An added perk of this technique is that it allowed us to create a visual break between the concrete and pavers using complementary colors.

In addition to being a relatively simple process, the installation of the French drain was both effective and visually appealing. Traditional polymeric sand would not have worked for this application since it is relatively impermeable after it cures.  For this project we utilized alliance nitro sand.  This sand is applied wet and is permeable after it cures making it a perfect match for this project.  We have used it a few times and find it holds up much better than traditional polymeric sands. 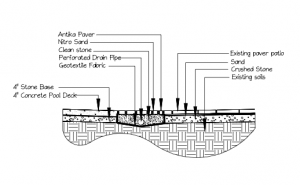 Learn more about French drains and other creative landscape solutions during an on-site consultation. Contact us here.

5 Creative Lighting Tips to Brighten up Your Backyard

5 Things to Look for in a Landscaping Company

Meet with an expert Landscape Designer at your home to discuss your dreams and visions for your property. We listen to your objectives and create a design that is specific to those goals and your budget.

Get Started Now
Previous
Next